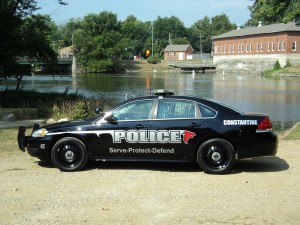 The first village constable was appointed in 1837. In 1960 the first police department was established and it has since expanded to a staff that now includes Five full time officers, 3 part time officers, 4 reserve officers, Police Clerk and an administrative assistant. The department patrols within the Constantine Village limits and handles approximately 1500 complaints a year. The rest of the time you’ll find the officers working traffic, assisting with school crossing, handling ordinance violations, and doing bike and foot patrols, along with many other duties.

Gone but not forgotten.

Their wisdom, strength and devotion to the Village of Constantine Police Department, and to those in their “extended police families” are sorely missed.

And let us not forget the only police office killed in the line of duty in Constantine.  On Friday, August 11, 1899 Night Watchman Edgar Cranston was shot and killed in the early morning hours after he came upon a group of burglars who were attempting to force their way into the post office.  As Night Watchman Cranston confronted the suspects, they open fire, striking him multiple times in the chest.  He died shortly thereafter.

The suspects fled the scene but a team of bloodhounds tracked at least one of the men back to his home.  The suspect was arrested and charged with the murder.  Edgar Cranston was survived by his wife of 31 years and his three children.

To apply with the Constantine police department please download and fill out the following two forms, be sure to sign where necessary. Once they are filled out, mail them or drop them off at: